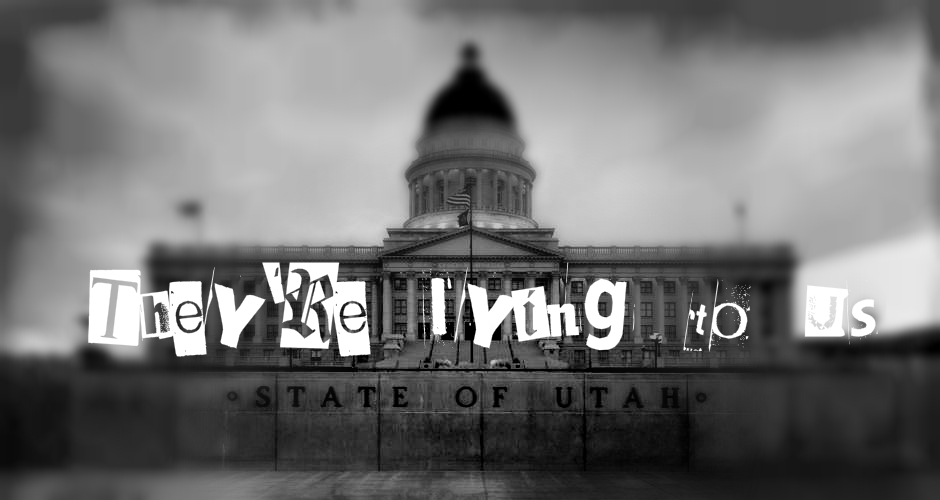 Only a sucker would believe that lawmakers will do something to address medical marijuana if Proposition 2 fails or barely squeaks by on Election Day.  Just a couple days ago a “compromise” was reached between members of the state legislature, the LDS Church, and Libertas but there is absolutely nothing guaranteeing that anything will be done if the initiative fails at the ballot box.

The bottom line is we can’t trust the legislature to pass a medical marijuana bill without putting our boots on their collective necks.  Politicians understand the power of money and the language of political pressure –that’s it.  Their word is not good enough and we must still vote for Prop 2 so that the burden of representing the people is squarely on their backs –they should get no relief regardless of “compromise”.

We must be scrutineers before, on, and after Election Day.  Think about it this way, the LDS Church has flooded the halls of our state legislature with their own political pressure.  They have the money, the connections, and as Bob Dylan put it, God on their side.  We, the citizens of this state cannot and should not accept any sort of empty promise as an excuse for letting up on this issue –do not accept “compromise” from organizations that lied to you and I.

Worse yet, the LDS Church allied itself with Dr. Adam Taintor of the Utah Medical Association who said this, “It is a poorly disguised initiative to allow recreational use into the state. … Qualifying illnesses under Proposition 2 for the marijuana card opens the doors for almost anyone to easily qualify for the card.”

The situation is not opaque.  It’s crystal clear that both church leadership and legislators know that Prop 2 is going to pass -don’t smile at that, you still must vote- and they’re trying to get in front of this to safe face and control the inevitable.

Medical marijuana will be coming to the Beehive State and to avoid embarrassment, those once ecclesiastical titans of politics are starting to feel their grip loosening, and so what better way to save face than by coming to a “compromise”?  With each vote cast in favor of Prop 2 the fingers on their stranglehold grow tired and will eventually be forced to let go.  So you must vote to avoid being choked out.

Remember the ads that were taken down?  Drug Safe Utah lied and their radio ads were pulled because they kept peddling the narrative that his was all about recreational use.  And now we’re expected to believe that those who tried sullying an initiative are going to do something regardless of how Prop 2 shakes out?  Does that really make sense?

Force is the only thing we can count on here.  Either we make it abundantly clear with a margin that cannot be misinterpreted, or we leave room for a gutless bill –or worst-case scenario the legislature does nothing.  Oh that won’t happen because they promise they’ll do something?

Posit this, a lawmaker presents a medical marijuana bill and it dies in the senate -in fact it never leaves committee and the senate floor never ends up debating or voting on it.  It’s written up very similarly to what’s on the initiative now, it ends up stalling, peters out, and becomes a never was.  You can’t imagine it?  Well it happened.  In March of 2016 Senate Bill 73 died a quick death -it was a medical marijuana bill- because the legislature didn’t feel the pressure.  Proposition 2 is how we add the pressure that SB73 didn’t come with, and every yes vote it receives makes it harder for lawmakers to ignore.

Are you getting the point yet?  You cannot bank on the word of lawmakers and church officials to follow through on their promises -because they’re liars.  We must all demand the will of the people at the ballot box.  Do not feel assured that medical marijuana will become real in this state, those in power do not have a track record that inspires trust –as proven by SB73.

If you’re registered to vote your ballot will most likely arrive on Monday October 8 or a day or two after.  I urge you to fill it out the same day you receive it and drop it off at the post office.  Once you’re done, remind your friends and family to do the same.  We cannot depend on the hope that medical marijuana will manifest itself in Utah, we must make it happen.

There’s no panache, no flair, no booming ending to this entry.  I only leave you with this warning and this sincere request, if you fail to act now, the state will use this as an excuse to continue to do nothing, so please vote and vote quickly –do not trust in the words of liars.