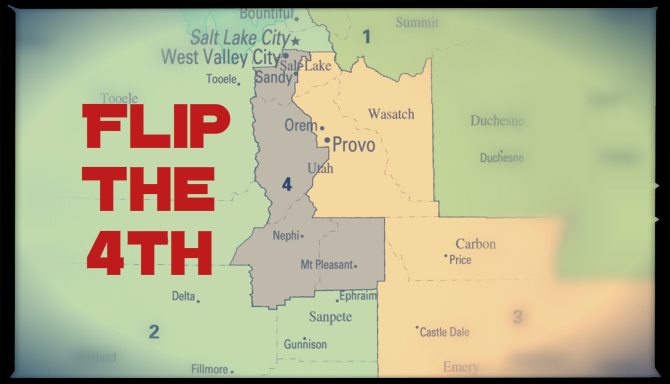 While the editorial board of The Salt Lake Tribune flaccidly endorsed Rep. Mia Love, the people of congressional district four took to their keyboards, to their minds, and to their hearts to provide a different assessment of the future ahead –including me.

People I know, who over the last two years have slapped together skill and will to unite residents in the district to come out and vote for Ben McAdams are spending their money, their time and their energy to walk their neighborhoods.  The conversations they have last anywhere from a couple minutes to a quarter hour –depending on how in the know the person answering the door is about the race.

Here’s the routine, you pull up MiniVAN -a prominent canvassing app-, tap in the identification number for whatever turf you’re covering, find your bearings and start walking.  A number of things cross your mind as you walk.  You worry no one will answer.  You worry someone will answer.  And in between the doors you knock and the pavement you cover you think to yourself –am I crazy?  The answer is obviously yes.

I’ve had the pleasure of meeting the looney bin and I’m better off for it.

There’s a certain comfort in rabble-rousing with those involved in, “good trouble”.  Consider Frank Brannan, a military veteran, a member of a different generation from my own, who comes from a different walk of life but has the same goal in mind that many of us in the fourth have.  He recently spoke his mind  about our current representation in Washington D.C.  He judges not the woman, but the voting record.

You also have those voices who have worked tirelessly to zoom in and focus on what’s done and what isn’t done by our current two term representative.  Both Rachel Frost and Chris Bell took umbrage at a confirmation provided by our local rag -who I happen to love by the way- who based their endorsement on topical and superficial reasons.  Both of these individuals aren’t judging Mia Love as a person but grounding their ruling on her voting record, her being a, “nice symbol, but empty as a leader”, just doesn’t cut it.

While the Deseret News has made it a long time policy to not endorse candidates a letter they received has called for something that you and I both agree with –we must vote for people who will hold the administration responsible.  We’ll each have to look within to discover who those people are.  But in the fourth we know who that is, it’s Ben McAdams.

If you haven’t noticed by now I’m not hinting at looking over what a Sean Hannity or a Lawrence O’Donnell might say about these elections.  I’m referring you to the voices of your neighbors who wake up every day, go to work, and in between their shifts and dinner time, plan and plot on how to get more civically engaged.  Connie Young out in Woods Cross said to look at a candidate’s record, what they’ve done, but most importantly to vote your values.  I wholeheartedly agree.

We’re only 11 days until Election Day.  Like many of you I checked the mailbox as soon as I found out that the county clerk had mailed out ballots.  I’ve already dropped mine off and have had a good number of friends and family ask me about the various items they’re voting on.  In many of their cases they’ve either never voted in the midterms or in an election period.  But it seems that they’ve found a reason to vote this time.  They remembered that their values are either going to be represented, ignored or worse, eroded.

Tomorrow is a new day to take action, to talk to neighbors, to remind friends and family.  Help them get ready for what should be classified as a national holiday but isn’t for some reason.  Remember that it’s OK to be crazy and step out of the preprogrammed dialog we carry on with each other as we go about our day, it’s OK to ask a stranger if they’re registered to vote.  They just might need help, and you might be the one to give it.